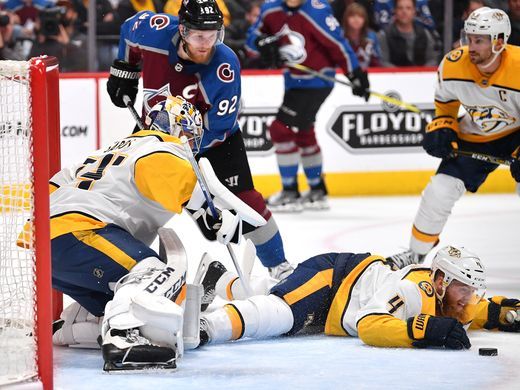 Colorado Avalanche fans were happy with the 5-3 win over the Predators in Game 3 Monday night of the Stanley Cup Playoffs, but not so happy with a play by Predators defenseman P.K. Subban, which came in the second period.


Subban landed a punch high from behind on Avalanche forward Nathan MacKinnon.

Subban and McKinnon were each assessed a holding minor penalty on the play.

The play is expected to be reviewed Tuesday by the NHL Department of Player Safety.

Avalanche coach Jared Bednar said: “I think both teams are under each other’s skin. That’s what happens when you play a seven-game series and you’re in Game 3. I think the emotions are high.”

Emotions were certainly high for Avalanche fans, who immediately started to chant, "Subban sucks" while also expressing their frustration on Twitter.

Subban is playing dirty and dangerous, needs to be tossed from the game #NSHvsCOL

— Michael Priebe (@Mike_Priebe) April 17, 2018
Subban literally took his hand off his stick to punch Mack in the side of the head. That was an attack not a check #NSHvsCOL

— Steve Nash (@NashvileRangers) April 17, 2018
While others admitted Subban was in the wrong.

Honestly, if I were an Avs fan I would be chanting “Subban sucks,” too. I absolutely love the guy, but that shot on McKinnon was pure trash. #Preds#Predators#StandWithUs#NSHvsCOL

— Keith Heim (@heimjazz) April 17, 2018
What in the world is Subban thinking there? He comes up and slugs MacKinnon right to the side of the head. In the middle of the play.

— Kristopher Martel (@kmartel_sports) April 17, 2018
Action by the Department of Player Safety could be handed down as early as Tuesday.

The Predators lead the series 2-1 heading into Wednesday's Game 4 in Colorado.

PREDATORS IN THE PLAYOFFS: Nashville's penalty minutes mounting through 2 games vs Colorado