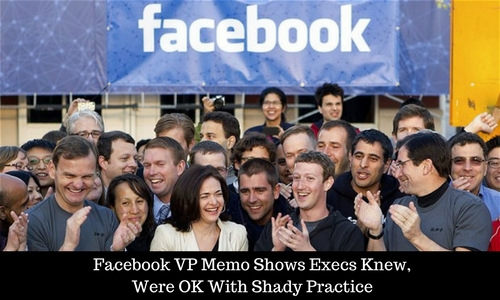 The evidence against Facebook is piling up even before Zukerberg appears before any formal hearing or investigation. The CEO and the company have already issued a mea culpa, but still mostly insisted it had no malice or intentional wrongdoing.

An internal memo written by Facebook vice Present Andrew Bosworth, however, may prove that to be untrue. “Boz”, as he is infamously known, cites how Facebook’s unchecked zeal for growth could even end up getting someone end but that the work that it does is pretty much in line with.

Facebook’s spirit and mission of connecting people. “It’s for the greater good” or “the end justifies the means” are phrases often used to explain or excuse actions that turn out to be unpopular or controversial.

In this case, that end was connecting people, the very essence of Facebook. To that end, Bosworth that everything the company does, like questionable contact importing practices, subtle (and confusing) language, and more are justified.

That memo, which would have been read by all executives and, later on, Facebook employees, implies that Facebook what very much aware it was doing something wrong enough to have to justify it as something for the better good.

In fact, Bosworth would have made them also very much aware of the risks involved in what they do, which could lead to fatalities.

That memo was made in 2016, a day after a Chicago man’s was streamed on Facebook live.

Since then, other deaths have also been blamed on or at least attributed to Facebook’s goal to connect people no matter what. Some present and former Facebook employees characterize the memo as “typical Boz”, explaining how the veep was known to be polarizing figure in the company.

That, ironically, also seems to excuse his disagreeable behavior, as if it were part of his nature and cannot be helped. Almost like how the memo suggests that Facebook’s nature is to connect people and that it cannot be helped if it does questionable things towards that goal.

Other executives, including Zukerber, explain that this was simply Bosworth’s strategy to encourage discussion and debate, inciting strong emotions to get the wheel rolling.

It doesn’t, however, reflect the beliefs of the company or the people running it. The memo, however, does at least prove that those executives knew what was at stake and won’t be able to claim ignorance in the matter.