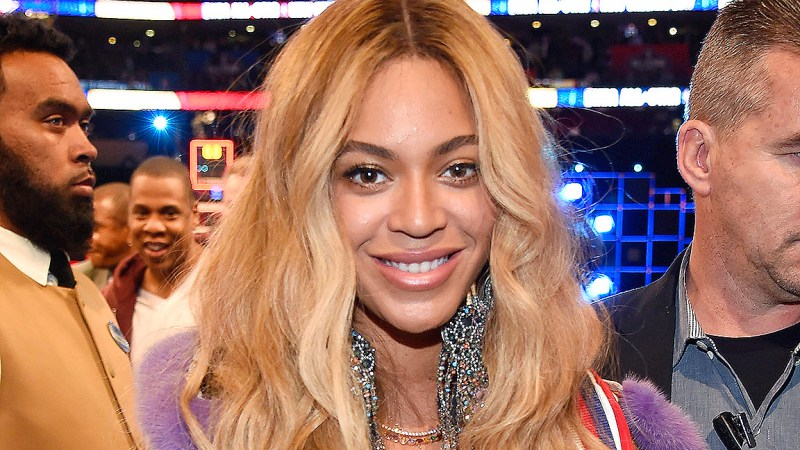 History in the making! Beyoncé became the first black woman to headline Coachella Valley Music and Arts Festival in Indio, California, on Saturday, April 14. And boy, did she deliver.


Queen Bey kicked off her set with a massive marching band and a dozens of backup dancers. She first appeared on a runway in a long, Egyptian-inspired Balmain cape before strutting over to the main stage and immediately changing into a collegiate-style yellow hoodie, high-waisted denim shorts and white boots.
“Y’all ready, Coachella?” she asked.

Beyoncé ran through a gamut of hits from the very start of the show, beginning with her 2003 debut solo single, “Crazy in Love.” She then transitioned into “Freedom,” “Formation” and “Sorry” from her 2016 visual album, Lemonade, all while impeccably mastering high-intensity choreography. During “Sorry,” she mixed in verses from two early fan favorites: “Me, Myself and I” and “Kitty Kat.”
After making the crowd go wild during “Bow Down / I Been On,” the entertainer took a page from the late Michael Jackson’s book and climbed onto a cherry picker, hovering above fans for a sultry take on “Drunk in Love.” She returned to the stage for a series of hip-hop tracks, including “Diva,” “Flawless” and “7/11.” At one point in the medley, DJ Khaled came over the speakers to announce: “After tonight, Coachella gotta rename Coachella the Beychella. New name alert: Beychella!”
Following a brief interlude that gave the marching band a moment to shine, Beyoncé walked back out in a black leather bodysuit and matching boots. She ran through “Don’t Hurt Yourself” before taking a seat on the bleachers and belting “I Care,” a tender moment in an otherwise high-energy set.


Beyonce and Jay-Z’s Sexy Romance
Up next, the singer took on “Partition” and “Yoncé,” followed by her recent collaboration with J Balvin and Willy William, “Mi Gente.” She Dutty Wined her way through “Baby Boy,” covered some of Jamaican singer Dawn Penn’s “You Don’t Love Me (No, No, No)” and then sang “Check on It” for the first time in five years. Jay-Z made a surprisingly brief, no-frills cameo to perform the couple’s 2006 collab “Déjà Vu,” ensuring that the spotlight largely remained on his wife of 10 years.
For the encore, a camouflage bodysuit-clad Beyoncé told the crowd, “Thank you for letting me be the first black woman to headline Coachella.” She slayed an empowering rendition of “Run the World (Girls)” before tackling what was arguably the biggest moment of the night: a surprise reunion with her former Destiny’s Child bandmates Kelly Rowland and Michelle Williams. The trio sent the crowd into a frenzy with three of their biggest hits: “Lose My Breath,” “Say My Name” and “Soldier.”
“My sisters! Please give it up for Kelly and Michelle,” Beyoncé gushed. “I love y’all.”


Beyonce’s Best Instagram Style
The Grammy winner’s actual sister, Solange Knowles, then appeared on stage to dance along to the fun-filled “Get Me Bodied” as Bey narrowly avoided a wardrobe malfunction. At the end of the night, Beyoncé, who did not do any new material, made sure everyone in the audience had their hands up in the air as she performed her megahits “Single Ladies (Put a Ring on It)” and “Love on Top.”
The mother of Blue Ivy, 6, and twins Rumi and Sir, 10 months, closed her 26-song, nearly two-hour set with a special message: “I’m so happy that I am here. I was supposed to perform at Coachella [last year] but I ended up getting pregnant — thank God! So I had time to dream and dream and dream with two beautiful souls in my belly. … Thank you guys for sharing this with me. I hope y’all enjoyed the show.”