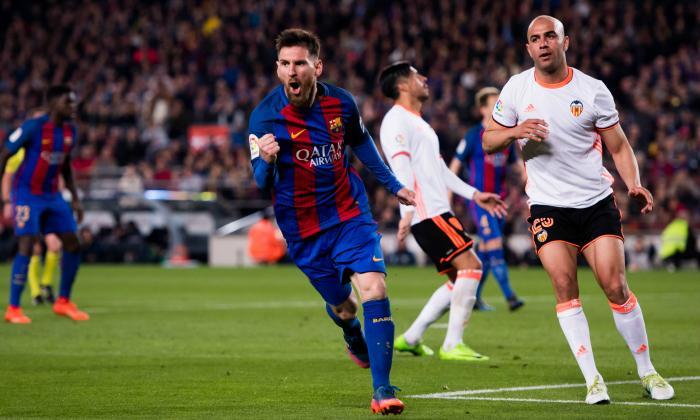 Ten-man Barcelona held on for an entertaining 2-2 draw with Celta Vigo in La Liga on Tuesday evening, keeping their unbeaten league run intact.


Ernesto Valverde named a much-changed side with an eye on Saturday's Copa del Rey final against Sevilla, and it was Ousmane Dembele (36) who opened the scoring for the visitors before Jonny (45) deservedly equalised for Celta Vigo on the stroke of half-time.
Barcelona reclaimed the lead in the 64th minute after Paulinho tapped home from close range, but they were reduced to ten men seven minutes later as Sergi Roberto - who had come on as a substitute 11 minutes earlier - pulled down Iago Aspas.
And it was the former Liverpool striker who got Celta Vigo level once again, scoring with eight minutes of normal time to play, but the hosts could not find another as Barcelona extended their unbeaten La Liga run to 40 matches and took another step closer to the league title.

Celta Vigo: Alvarez (7), Wass (7), Jonny (7), S Gomez (6), Roncaglia (6), Sisto (7), Lobotka (6), Jozabed (6), Mendez (7), M Gomez (7), Aspas (8).Subs used: Radoja (5), Mor (6), Boye (4).Barcelona: Ter Stegen (7), Semedo (7), Digne (6), Mina (7), Vermaelen (6), D Suarez (6), Dembele (7), Coutinho (6), Paulinho (7), Gomes (6), Alcacer (6).Subs used: Messi (6), Roberto (3), Vidal (5).Man of the match: Iago Aspas.
It was a lively first half with plenty of chances for both sides, and both goalkeepers were called into action early on. Marc-Andre Ter Stegen did fantastically well to collect a powerful effort from Maxi Gomez in the tenth minute, before Celta Vigo stopper Sergio Alvarez made a leaping, fingertip save to keep out Paco Alcacer not long after.
Both sides also skimmed the woodwork in quick succession, with Paulinho's header only able to hit the bottom of the post from a corner in the 26th minute before Celta Vigo put together a swift break, but Brais Mendez saw his sweeping effort go past the upright after taking a slight deflection.
But Barcelona did nab the opener in the 36th minute as Philippe Coutinho pounced on a loose pass from the hosts before driving towards goal. He picked out Alcacer to his left who in turn was able to find Dembele at the top of the area with a skewed touch, and the 20-year-old made no mistake in sweeping home for his first La Liga goal for the club.
Although it looked like Barcelona would go into the break ahead, Celta deservedly got their equaliser on the stroke of half-time. Aspas picked out Maxi Gomez down the right flank, who then played a sweeping ball across the face of goal that was turned home by Jonny at close range.
The first changes were made by Barcelona in the 60th minute as Lionel Messi and Sergi Roberto were introduced, and they retook the lead four minutes later. Dembele and Nelson Semedo played a give-and-go down the right before the latter put a superb ball into the six-yard box, where it was turned home by the waiting Paulinho.
But Barcelona were dealt a blow in the 71st minute when they went down to ten men. However, there can be no argument from Roberto after he pulled down a powering Aspas, who would have been through on goal. It was an instant red card for the substitute and Barcelona's first dismissal in La Liga this season.
With the man advantage, Celta Vigo continued to press for the next goal and they got their reward in the 82nd minute. Emre Mor whipped a stinging cross into the area that was initially pushed away by Ter Stegen, but he failed to spot Aspas attacking the near post and the ball rebounded off the striker's body before ending up in the back of the net.
But despite Lucas Boye spurning a glorious chance in the 90th minute - slipping as he went for goal which was eventually blocked by Lucas Digne - Celta could not end Barcelona's record-breaking unbeaten run.

Man of the match - Iago Aspas

Given the captain's armband for the game, Aspas stepped up to the plate and was an attacking force for Celta Vigo as he continued his impressive season for the club, and was heavily involved in much of their forward play - of which there was a lot.
He set off the move for Celta Vigo's first equaliser before scoring the second and although he may not have known much about it, his positioning shows how hungry he is for goals. It was an eye-catching performance from the striker.

Celta Vigo are at home for their next La Liga game when they host Valencia on Saturday while Barcelona are in Copa del Rey final action against Sevilla, live on Sky Sports Mix with kick off at 8.30pm.