German champions Bayern Munich have announced Eintracht Frankfurt boss Niko Kovac will succeed Jupp Heynckes as their manager at the end of the season. 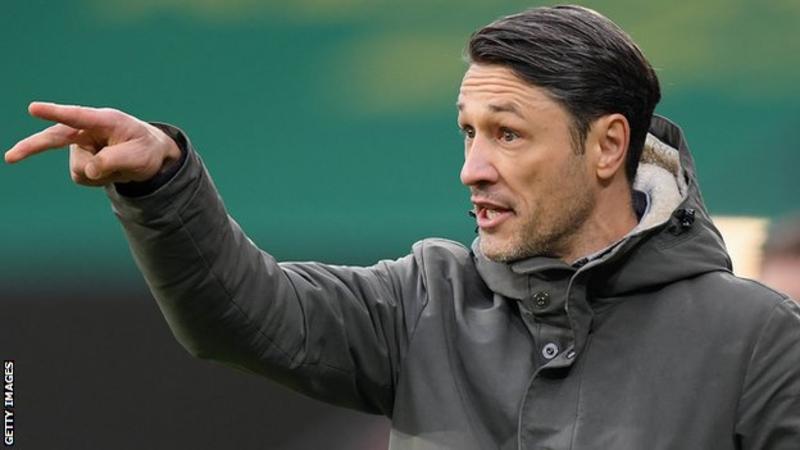 
The 72-year-old is in his fourth spell at the club, and could yet win the Champions League again.
Former Croatia captain and boss Kovac played for Bayern from 2001 to 2003.
He has signed a three-year contract and will take up his new role on 1 July.
Kovac's brother Robert, also a former Bayern player, will move with him from his role as Eintracht head coach to be his assistant.
The new manager, born in Berlin to Croatian parents, is under contract to Frankfurt until 2019 and reports in the German media have suggested his release clause is 2.2 million euros (£1.9m).
Both clubs last week denied Kovac was on his way to Munich.
"There is no reason to doubt that I will be the coach of Frankfurt next season," he said.
Several high-profile coaches, including Tottenham boss Mauricio Pochettino, were linked with the Bayern job after Heynckes reportedly rejected the offer of a contract extension.
Germany's World Cup-winning head coach Joachim Low ruled himself out of contention, declaring his intention to honour his contract with the national team, which runs until 2020.
Former Borussia Dortmund coach Thomas Tuchel also rejected the chance to join the German champions, who on Friday were paired with Real Madrid in the Champions League semi-finals.
"Niko knows the people in charge as well as the structure and the club's DNA," said Bayern sports director Hasan Salihamidzic. "We are convinced he is the right coach for the future of Bayern."

BBC World Service's John Bennett
After Pep Guardiola and Carlo Ancelotti, it's a move away from the big-name bosses for Bayern, but the club hierarchy were adamant that they wanted a German-speaking head coach to replace Heynckes.
Kovac spent the majority of his playing career in Germany with the likes of Hertha Berlin and Bayer Leverkusen, as well as spending two years at Bayern.
As a coach, he took Croatia to the World Cup and has turned Eintracht Frankfurt from relegation battlers into top-four chasers in just two years. But he's never won anything as a head coach or managed in the Champions League.
As Ancelotti found out, Bayern have a strong dressing room and the players can turn against you if things start to go wrong. Heynckes will be an extremely tough act to follow. Will he be staying close to the phone next season just in case there's another emergency?