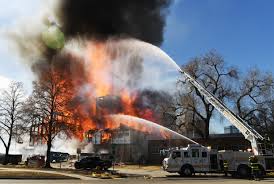 The New Orleans Fire Department battled an overnight three-alarm fire in the heart of Uptown.

Around 3:17 a.m. NOFD received a 911 call reporting a fire in the 1800 block of General Pershing St., according to a news release from NOFD.

The first fire company arrived on the scene at 3:23 a.m. and found a one-story, three-story wood-framed residence with heavy smoke coming from the attic.

NOFD immediately began battling the fire and determining whether or not any residents were inside. Withdrawing residents of the home was first priority upon arrival to the scene, according to NOFD.

The make and size of the building made it difficult for NOFD to get the fire under control, along with strong winds which fueled the fire.

The physical strain on firefighters caused by the heat and humidity triggered a third alarm at 4:09 a.m.

NOFD is praised for “confining the fire to its’ place of origin and minimizing the potential for a much greater amount of damage, but also diligently searching the entire structure to ensure all residents had been safely evacuated,”  the NOFD news release stated.

Twenty-one NOFD units carrying 60 Fire Operations personnel were on hand, fighting to bringing this fire under control at 5:11 a.m.

Entergy, New Orleans EMS, and The American Red Cross were also on the scene assisting with the logistics of this incident.