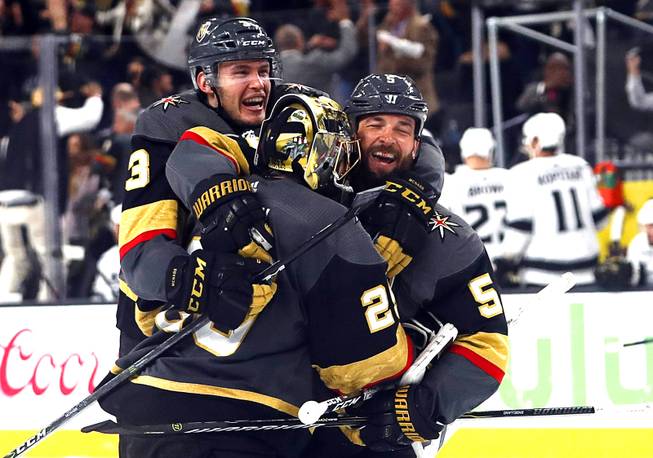 The Golden Knights’ locker room looked more like a hospital clinic during the brief overtime intermissions Friday night than a strategic meeting room. Exhausted players devoured pizza for carbohydrates and washed it down with whatever amount of Gatorade they could keep from coming back up.


Some players wrapped their chests and backs in cold wraps, while others received leg massages to subside their cramping, dehydrated muscles.
In the end, it was worth it.
Erik Haula deked around Kings’ goaltender Jonathan Quick, slid the puck between his pads and into the goal, and the record-breaking crowd erupted into perhaps the biggest party in a city known for its late-night festivities.
Haula’s double-overtime winner gave Vegas a 2-1 win, ending the game after 95 minutes of torturous, grueling hockey that left both teams battered, bruised and gasping for air.
“That’s one of the best feelings in sports, finishing the game in that fashion,” Haula said. “It was a long game, so it’s very rewarding to come out on top.”
The monumental win not only gives Vegas a 2-0 lead in the series as it shifts to Los Angeles, but the fashion in which it was won — and more importantly the effort expended by both teams — makes it even more important.
“I don’t know what tonight’s game will take out of both teams,” Golden Knights coach Gerard Gallant said. “I don’t think the pace will be quite the same as it was because guys are pretty tired and beat up from five periods of hockey tonight.”
The Golden Knights had seven players with more than 30 minutes of ice time. At times it looked like they were ready to collapse onto the ice, but then they’d take a deep breath and race down the ice for another scoring chance.
Vegas outshot Los Angeles 56-30, with Quick being the only reason the Golden Knights didn’t score two, three or six goals.
“He’s a two-time Stanley Cup champion and he’s a great goaltender,” Haula said. “We know that we need traffic and we need a lot of pucks to the net. We have to make him uncomfortable and we have stressed that in the locker room.”
The Golden Knights dominated play for almost the entirety of the game but only capitalized twice.
“We just kept playing the same way and that’s what we’ve been talking about it,” Haula said. “Going into overtime we just stressed in the locker room to keep going after them, keep getting pucks behind them, keep playing north and keep playing fast.”
Eventually Quick cracked and the game was over. The entire game — all 54 saves — was for nothing.
“It’s exhausting,” Golden Knights forward James Neal said. “I’ve been on both ends so it’s tough to lose them and it’s great to win them. But at the same time you have to regroup and focus on the next game because they happen quick.
“It’s tough no matter what to lose games, especially when they go deep into overtime,” he said. “You lay everything out on the line.”
And while both teams will wake up sore tomorrow, the Golden Knights muscles will have the benefit of being up 2-0.
“It was huge,” Gallant said. “We took care of our home ice advantage and that was a huge win tonight. It was another great hockey team and there are too tired hockey teams for sure.”
Nate Schmidt sat at his locker after the game, his equipment strewn about the floor because he was too tired to gather it together. But even as exhausted as he was, he was still in a good mood.
“I just want to thank Haula for doing what he did, so we can get out of here, get home, get some sleep and get ready for game three,” he said laughing.
On the Kings’ side, coach John Steven’s post game interview had the aura of a morgue.
“It’s not devastating,” he said. “We expended a lot of energy but it doesn’t matter if you win in regulation or in quadruple overtime it still counts as one. They won their two home games so we have to go home and get to work.”
If one of the teams will be affected more by the energy poured into this game, it is likely the Kings.
“I think we had some young legs and they didn’t play as much as some of the other guys,” Gallant said. “In the overtimes you have to play everybody. Shea Theodore can skate all day long, and when those guys are moving their feet like that it makes a big advantage for us.”
The Kings spread their minutes a lot less than Vegas, and had two players (Alec Martinez and Oscar Fantenberg) who played more than 40 minutes of ice time.
Los Angeles now hosts the next two games, Sunday and Tuesday night, and will likely need them both. In order to survive the series the Kings will have to win four of the next five games against the Golden Knights, who have lost four out of five games only twice this season in 84 games.
“We go to their building and it’s going to be harder,” Haula said. “They’re going to be better and we know we have to be better.”
Gallant’s post game press conference, which stretched to early Saturday morning, was partially held up when the microphone went out.
“Something died,” he joked.
It may have been the Kings’ chances to win this series.