Bitcoin is a bubble and a perfect example of ‘faddish human behavior,’ says Robert Shiller 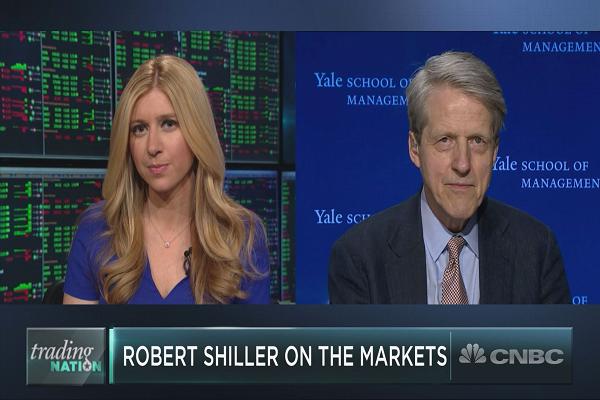 Bitcoin is coming off one of its best one-day performances of the year, but one Nobel Prize-winning economist sees the cryptocurrency as more of a psychological experiment than a serious investment.


"I'm interested in bitcoin as a sort of bubble. It doesn't mean that it will disappear, that it'll burst forever. It may be with us for a while," Robert Shiller, professor of economics at Yale University and co-founder of the Case-Shiller Index, told CNBC's "Trading Nation" on Thursday.

"To me, it's interesting as another example of faddish human behavior. It's glamorous," he added.

The bitcoin craze reminds him of tulip mania in the 17th century. At that time, the price of tulip bulbs ballooned, peaked and then crashed in early 1637. The event is considered one of the first recorded speculative bubbles where a buying frenzy and lofty expectations replace rational justifications for an item's value.

Bitcoin's ascent has been steep. The cryptocurrency hurtled above $1,000 in early 2017 after trading at less than a $1 at the beginning of the decade. It hit an all-time high north of $20,000 in mid-December. Prices ended last year more than 14 times higher than where they started.

While Shiller does not own any bitcoin, many of his students have bought them as fractions and he says many others have likely made a lot of money off their investments.

"I don't mean to dismiss it. Some smart people went into these and other cryptocurrencies," said Shiller, who won the Nobel Prize for economics in 2013. "But it's a story that I think goes way beyond the merit of the idea. ... It is more psychological than something that could be explained by the computer science department."

As with most things, politics has touched this, too, said Shiller.

"Part of it is political. Economists tend to neglect the political side," he said. "There's a big element of people [who] don't trust the government anymore. They like the idea that this didn't come from the government. It came from some real smart computer scientist. They like that. It's a great story for today's markets."

Bitcoin held above $8,000 on Friday morning after topping that level a day earlier. The two-day rally comes after a weak start to April likely tied to tax-related selling. Prices dipped below $7,000 earlier this month.