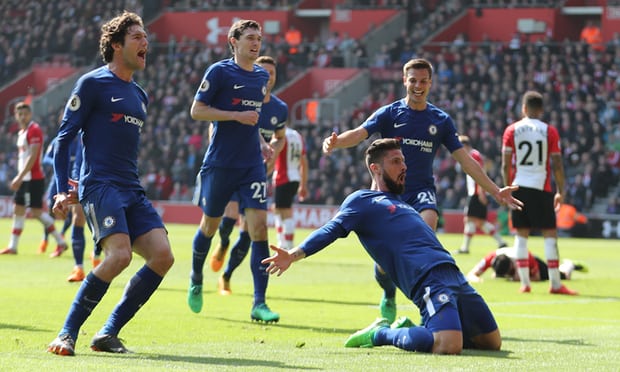 Olivier Giroud came off the bench to score twice as Chelsea stormed back from two goals down to send Southampton one step closer to relegation.
A first-half strike from Dusan Tadic was added to by Jan Bednarek on his first start for the Saints, as Mark Hughes looked like claiming a vital first win as the Saints manager. But a decisive intervention by Antonio Conte led to three goals in eight minutes for Chelsea, with Giroud’s brace coming either side of a thumping finish from Eden Hazard.
Before Conte and Giroud made their presence felt Chelsea looked to have been meandering to another underwhelming performance that has typified their form since the turn of the year.
Southampton looked like they had the spirit and confidence to resist the siren call of the Championship but while three points for Chelsea leaves Champions League qualification still a distance away, Saints have only one win in 20 Premier League games and remain three points from safety with five games left.
Southampton’s opening goal typified their first half performance; simple enough but made effective through determination. Ryan Bertrand hardly concealed his intentions. The Saints captain was going to run at César Azpilicueta, from his own half, and invited Pierre-Emile Hojbjerg to find him with a pass. The Dane duly accepted the invitation and Bertrand won the race and advanced into the Chelsea box. There he held off a second challenge from Azpilicueta and played a pass with the outside of his boot that evaded the advancing Thibaut Courtois. Tadic anticipated faster than the defence and fired the ball low past Gary Cahill into an empty net.
This was the sort of spirit Hughes had celebrated in Southampton’s previous performance against Arsenal and it satisfied the St Mary’s crowd too. They sang Tadic’s name, a reminder the forward is popular with the home support, if not always his managers. The Serb was the fulcrum for Saints’ attacking ambitions. Four minutes after the goal he teed up Shane Long to cross to the far post where Courtois only just beat Cédric Soares to the ball.