Juventus’ Near Miracle Against Real Madrid Ends in Controversy 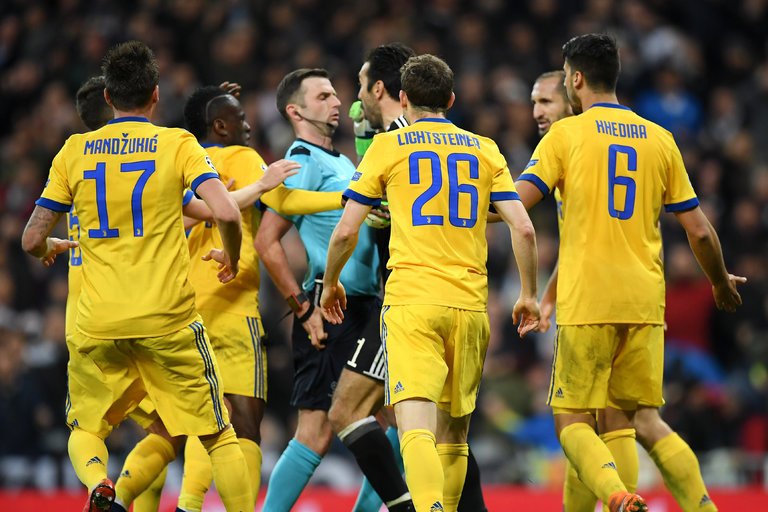 MADRID — Gianluigi Buffon, Juventus’s veteran goalkeeper, has lived through all the highs and lows of soccer, from winning the World Cup with Italy to getting relegated with his club because of a match-fixing scandal.
But even by such standards, his exit from the UEFA Champions League on Wednesday night will rank as one the most dramatic events in his career. In the dying moments of the game, Buffon was shown a red card for angrily protesting a penalty that allowed Real Madrid to advance to the semifinals of the competition.

As Buffon left the field under the applause of the Madrid crowd, the man who stepped forward to take the penalty was inevitably Cristiano Ronaldo, the undisputed goal-scoring machine of the Champions League.
Ronaldo had to wait several minutes while Buffon’s teammates surrounded the referee and argued about the ejection. But Ronaldo kept his own composure and eventually hit an unstoppable shot past the Juventus replacement keeper, Wojciech Szczesny, before taking off his shirt and running toward the corner flag to celebrate. Remarkably, Ronaldo’s winning penalty kick was his 120th goal in the competition and also made him the first player to score in 11 consecutive Champions League games. 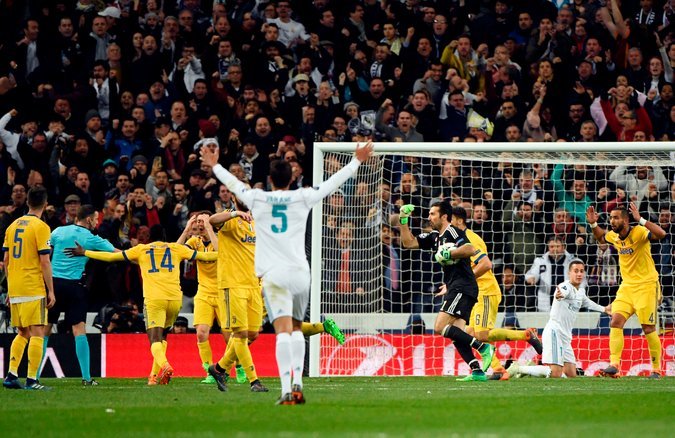 For Real Madrid and Ronaldo, the penalty was enough to ensure a 4-3 aggregate victory over the two legs against Juventus and keep alive their dream of a third consecutive Champions League trophy. For Juventus and Buffon, on the other hand, it was a heartbreaking end to a game that had long appeared on course to become another comeback victory by an Italian team over a Spanish rival.
After arriving in Madrid for the game at the Bernabéu, Buffon, 40, had played down the chances of overcoming a 3-0 deficit from the first leg in Turin. He said at a news conference on Tuesday that the idea of ending his Champions League career was “not a drama.” In fact, he added, “if that turned out to be the case, I would have signed as a child to be able to play my last game in the Bernabéu against Real Madrid.”
But a few hours after making those comments, Buffon and his Juventus teammates watched Tuesday’s incredible turnaround victory in Rome, where Roma thumped Barcelona by 3-0 to earn its place in the semifinals, after having lost 4-1 in Barcelona a week earlier.
With that, Juventus started Wednesday’s game with the clear belief that they could emulate the performance of the Romans, even without their suspended Argentine striker, Paulo Dybala.
After just over one minute, Sami Khedira, the former Madrid midfielder, carved open the Spanish defense with a cross for the unmarked Mario Mandzukic, who planted a firm header past Keylor Navas. Six minutes later, the Madrid crowd was once more silenced by another misunderstanding between Madrid’s central defenders. This time, Douglas Costa pounced on a clear mistake by Raphael Varane and his effort was pushed back by Navas into the feet of Gonzalo Higuaín. But the former Madrid forward scuffled his chance alone in front of goal. 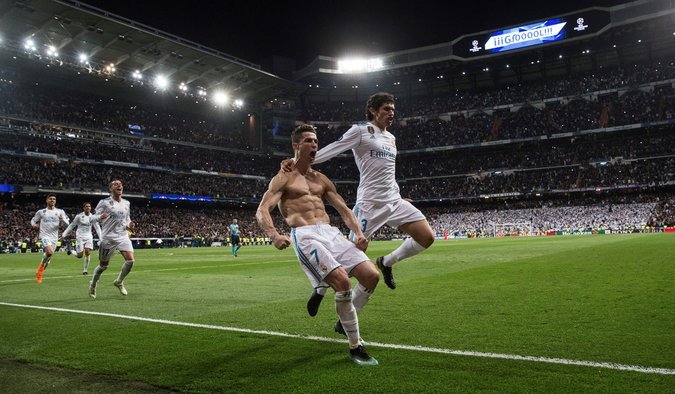 Even as Real Madrid started to threaten at the other end of the field, its midfielders struggled to keep possession and slow down the pace, while its defenders continued to show unusual signs of nervousness. The team clearly lacked cohesion without Sergio Ramos, the captain who watched from the stands after getting suspended for Wednesday’s game because of a yellow card received last week in Turin.
Ronaldo, for his part, spent much of his time on the ground, complaining about what he perceived to be uncalled fouls, or waving his arms in the air to urge the Spanish fans to raise their voices above the “Juve, Juve” shouts from the top corner of the stadium, occupied by the Italian club’s fans.
The second goal from Juventus, after 37 minutes, was similar to the first one. Mandzukic headed in another cross from the right, this time delivered by Stephan Lichtsteiner.
After 61 minutes, Navas made his first major blunder of the whole tie against Juventus — and he was made to pay for it. He fumbled an apparently innocuous cross from Costa, dropping the ball at the feet of Blaise Matuidi, who slotted the ball into the net.
In the 85th minute, Ronaldo could have killed off the game but glanced a near-post header high above Buffon. The Portuguese striker looked a shadow of the player who had scored twice a week earlier, including one which came on a bicycle kick that had left his coach, Zinédine Zidane, scratching his head in disbelief and the Italian fans applauding his exceptional display of agility, skill and timing.
But then came the last-minute push on Lucas Vázquez that offered Ronaldo the chance to redeem himself and qualify Madrid with a textbook penalty kick.
After the game, Zidane insisted that both teams had clear chances, but acknowledged that Madrid had struggled to recover its composure after suffering an early goal.
“What we weren’t expecting was taking a goal after one minute,” he said. “That changes everything, because the others were lifted while we lowered our heads.”
Overall, Zidane argued, “if we look at the two games, we deserve to get to the semifinals and that’s it.” Massimiliano Allegri, the Juventus coach, unsurprisingly offered a different reading:
“If you look at both games, both teams would have deserved to qualify, but that isn’t possible,” he said.
After the game, a calmed-down Buffon told reporters that “life continues,” and that he was proud that “we made real something that had appeared impossible. It’s a shame that it should end like this.”
Zidane, for his part, refused to discuss the circumstances of the last-minute penalty, saying that “referees have a difficult job.” He added: “I’ve had opportunities to argue with referees, but I don’t do it.”
He offered words of comfort for the Italian keeper, whom he had also faced as a player in another dramatic game, the final of the 2006 World Cup in Germany — when Zidane himself was sent off for head-butting Marco Materazzi, the Italian midfielder, in the chest.
“Buffon didn’t deserve this,” Zidane said on Wednesday night. “It doesn’t take away what he has done and has been. He’s an enormous player. It’s a shame to end that way the Champions League.”
BAYERN MUNICH 0, SEVILLA 0 Bayern Munich reached its sixth Champions League semifinal in seven seasons with a draw at home against Sevilla in the second leg of their quarterfinal on Wednesday. Bayern, which clinched its sixth consecutive Bundesliga title on Saturday, progressed to the final four of Europe’s premier competition thanks to its 2-1 win in the first leg in Spain. Sevilla had chances on Tuesday, including Joaquin Correa striking the crossbar with a header just before the hour mark, but it could not break through.