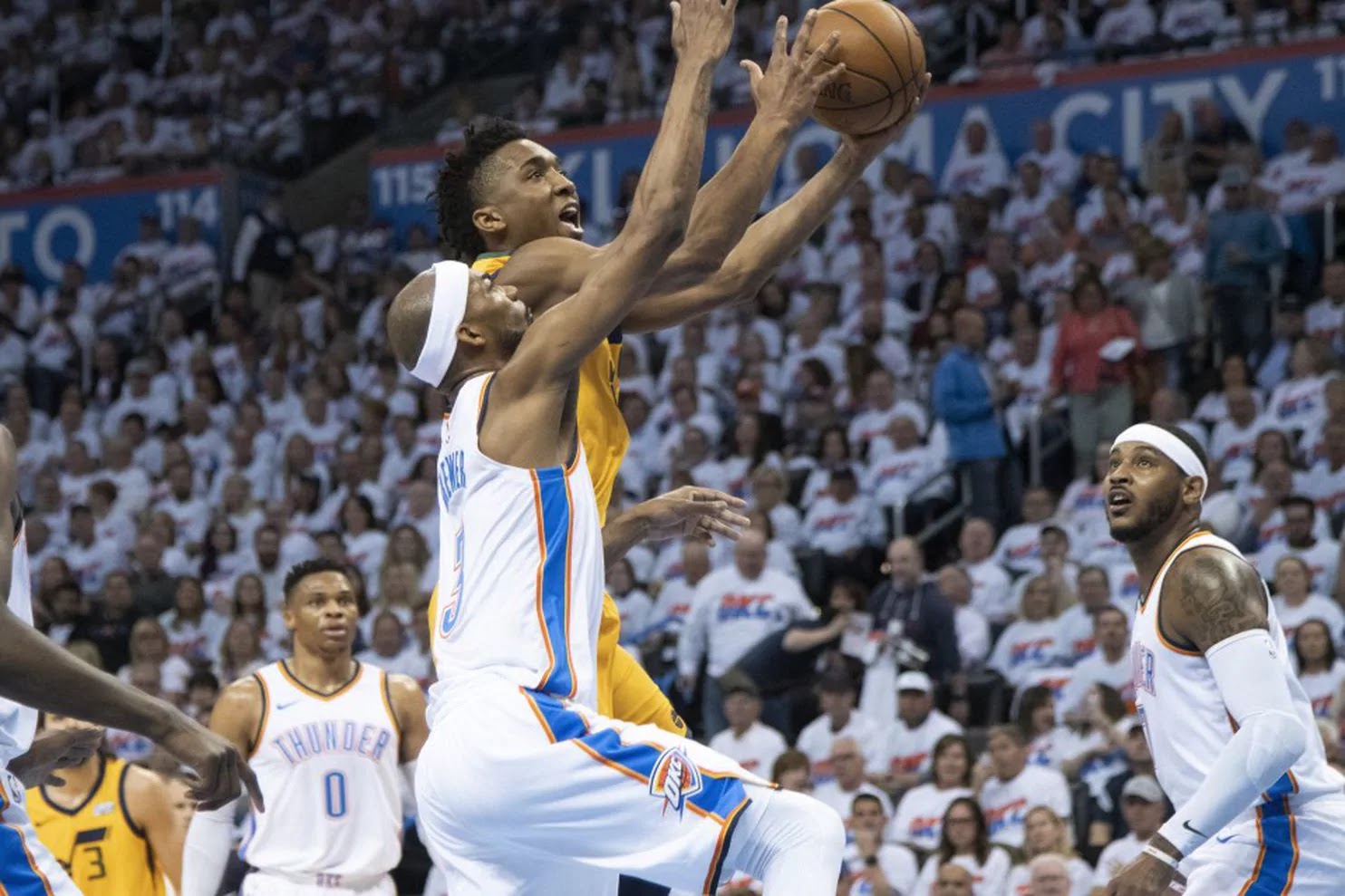 The first round of the NBA playoffs continues today with three pivotal Game 2s. Follow along here for the latest analysis and commentary from The Post’s NBA reporter Tim Bontemps, and ask him questions in the comments section.


The Minnesota Timberwolves were up 22-13 late in the first quarter, and it looked like Game 2 of their first round-series with the Houston Rockets had a chance to be the same kind of nip-and-tuck affair that Game 1 turned out to be.
Then the Rockets woke up. And, before long, things got out of hand.
Houston, which started the game 1 for 8 from three-point range, finished the half going 7 for 17 from behind the arc. That powered a 42-18 run to close the half and allowed the Rockets to take a 55-40 halftime lead.
The Wolves were always going to have trouble making the math work in this series. The first half of this game — with Houston going 8 for 25 and Minnesota going 2 for 9 from three — was emblematic of that.
The Utah Jazz had their season hanging in the balance. Then Donovan Mitchell — rookie Donovan Mitchell — saved the day.
Scoring 20 of Utah’s final 36 points — seven in a row in the final minute of the third quarter, and then 13 in the fourth — as well as assisting in Ricky Rubio’s three-pointer with 4:02 remaining in the fourth that put the Jazz ahead for good, Mitchell carried Utah to a 102-95 victory in Game 2 that evens this best-of-seven series at a game apiece, as Oklahoma City’s stars couldn’t get it done in the fourth.

Ben Dowsett✔@Ben_Dowsett
Donovan Mitchell becomes the 2nd rookie in NBA history to score 27+ points in his first 2 playoff games. The other: Kareem Abdul-Jabbar.

Twitter Ads info and privacy
Not the best start if you’re Indiana.
So in the first 78 seconds of Cavaliers-Pacers, we have:
– LeBron James scoring six points on three baskets.– Victor Oladipo being called for a backcourt violation.– Victor Oladipo being called for a charge.– Victor Oladipo being called for a second foul and going to the bench 62 seconds into the game.
Let’s just say that wasn’t the start the Pacers were looking for.
Cavaliers shake up lineup … and they clearly want more offense.
The starting lineup that was supposed to last for the entirety of the Cleveland Cavaliers’ run through the playoffs lasted for all of one game.
After the Cavaliers were routed by the Indiana Pacers in the opening game of their first-round series, Coach Tyronn Lue leaned into his team’s strengths — offense, and specifically shooting the three — and began Game 2 on Wednesday night with a starting five of George Hill, Kyle Korver, J.R. Smith, LeBron James and Kevin Love.
That should be a devastating offensive attack, with four premium three-point shooters surrounding James. Cleveland needs to get its outside shot back on track after going 8 for 34 from behind the arc in Game 1, and this should do the trick.
What it won’t do, though, is allow the Cavs to play much defense. Truth is, though, Cleveland doesn’t have much of a chance to stop anyone, anyway. It’s going to have to score to win — and this lineup should give it a chance to score a lot.
Could LeBron James, Cavaliers really go down 2-0 in the first round?
LeBron James finds himself in an unusual position: down 0-1 in a first-round playoff series.
Before the Cleveland Cavaliers were blown out in Game 1 by the Indiana Pacers, James had won 21 straight first round playoff games — going all the way back to Game 4 of the Miami Heat’s series against the New York Knicks in 2012. The Cavaliers have gone 36-5 over the past three seasons in the Eastern Conference since James returned to Northeast Ohio in 2014.
Now, though, Cleveland heads into Wednesday night’s Game 2 against Indiana with the very real possibility of going down 0-2 in the series staring the Cavaliers in the face — a moment James said shouldn’t be surprising that it has arrived, given how turbulent Cleveland’s season has been.
“I think we spent so much time trying to figure out who we were in the regular season and getting the right lineups and guys in and out and things of that nature, we could never build for the playoffs. It was kind of like, build for the next game,” James told reporters Wednesday morning. “So the postseason finally hit us and it hit us very well. And I think that can be the best teacher for us to know exactly what we should be ready for tonight.”
The Cavaliers need to be ready, or their season could be in jeopardy. Indiana has gone 4-1 now against Cleveland this season, and former DeMatha star Victor Oladipo is playing at an all-NBA level.
It’s unlikely the Pacers will shoot 11 for 28 from three again (they were 25th in the NBA in three-pointers made this season), just as it is unlikely the Cavaliers will shoot 8 for 34 (they were third). But it will take more than shooting regressing to the mean for Cleveland to look better than it did in Sunday’s lackluster performance.
And, if it doesn’t, the Cavaliers might have far less time to build than James, or anyone else, could’ve expected.
Wednesday’s schedule