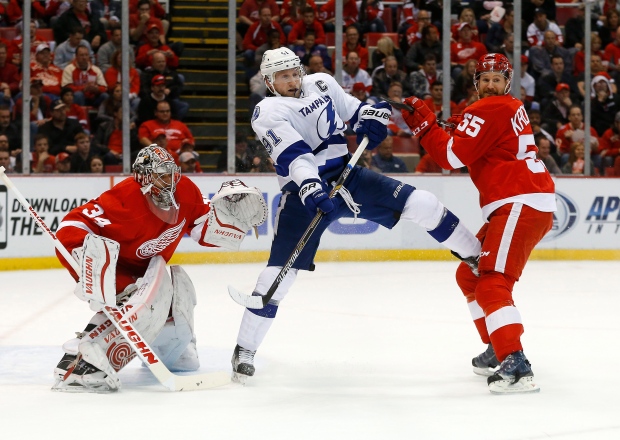 
With 3:51 left in the first period, Kucherov delivered a high check to Vatanen as he carried the puck into the Lightning zone, sending him into the air and then down to the ice. The Devils defenseman left for the dressing room and did not return. New Jersey coach John Hynes said there was "no update" on his status following the 3-1 loss to Tampa Bay.
The NHL department of player safety determined that Vatanen's head was not the main point of contact on the hit, which is a determining factor for "illegal check to the head" rulings.
While the hit was similar in nature to the one that Los Angeles Kingsdefenseman Drew Doughty delivered to Vegas Golden Knights forward William Carrier, which earned Doughty a one-game suspension, the league said Kucherov's hit was actually the way Doughty should have delivered his hit to Carrier, rather than making significant contact with his head.
Vatanen is listed as day to day. Hynes didn't add detail on the injury Thursday morning before the Devils flew to Florida.
Lightning coach Jon Cooper called the Kucherov check "a heck of a hockey hit" after the game, and didn't believe his star winger would be suspended. "The only thing that's down about that is that Vatanen got hurt. There's hitting in the game. It was a bang-bang play. To me, it was a good hit," he said.
Hynes, meanwhile, declined to comment on the hit. "It does me no good to get into it," he said.
Kucherov had two goals and an assist for Tampa Bay in Game 4, and four goals and five assists overall in the series. An MVP candidate in the regular season, Kucherov had 39 goals and 61 assists to break the 100-point barrier for the first time.