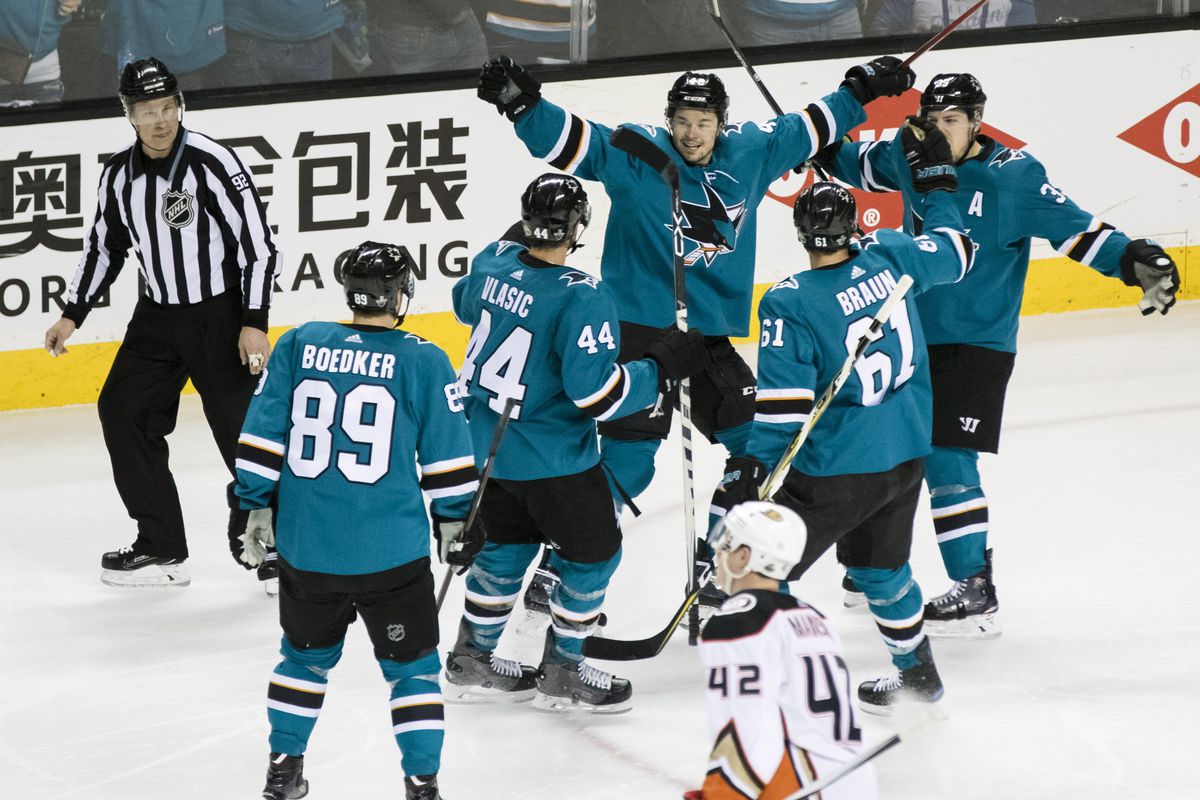 The Western Conference series between the Anaheim Ducks and San Jose Sharks was supposed to be the most back-and-forth, even matchup in the entire first round of the NHL playoffs. Computer and analyst projections of which California team would win mixed.

Though the Sharks eclipsed the Ducks in just about every advanced offensive metric, Anaheim pushed back with stellar goaltending, defensive prowess, and effective two-way play. The teams were separated by just a point in the regular-season standings, with Anaheim getting home-ice advantage with a total of 101 points.
The teams seemed a lot more evenly matched than they turned out to be. On Wednesday, the Sharks wrapped a series sweep with a 2-1 win at home. And it really didn’t look that hard for the Sharks to break out the brooms. Here’s why:

Randy Carlyle’s style of hockey doomed Anaheim from the start.

The return of head coach Randy Carlyle before last season was generally not a popular move in analytical circles. He convinced the Ducks’ higher-ups that he’d learned and evolved enough since his last stint with the team ended in 2012 to make the Ducks successful again this time around. (In between, he’d coached the Maple Leafs for three and a half years, making the playoffs once and losing in seven games.)
But the Ducks’ epic failure against the Sharks makes it clear that Carlyle hasn’t changed. He coaches the same old-fashioned brand of hockey he always has, and it didn’t work.
The Ducks used dump-and-chase techniques focused on getting the puck out of their defensive zone, whether they had possession or not, as opposed to crisp passing or skillful skating. This style of play is frustrating when you look at the Ducks’ roster, because they have tons of pieces on the back end who can do all of those things effectively.
Anaheim’s offense also tended to wait for plays to set up, passing lanes to open, or the opposing defense to make a mistake, rather than creating opportunities for themselves. San Jose ate all of this up, clogged lanes, established position, and didn’t bite when the Ducks tried to get under its skin. As a result, they exploited Anaheim at every possible turn.

John Gibson’s regular-season play was so consistent and solid that he should’ve been a finalist for Vezina Trophy nomination. (He wasn’t.) Gibson was the reason a lot of people projected the Ducks to ultimately take the series. But he gave up 13 goals in four losses and had an .889 save percentage. The Ducks didn’t do badly in possession stats, but Gibson wasn’t nearly good enough to overcome an extreme lack of offense.
Gibson’s Achilles heel was poor defense in front of him. For example, he was the only Duck to show up to play for the first 10 minutes of Game 3. The scores throughout the four games could’ve been a heck of a lot worse if not for his big stops to start the tilt. But as the series went on, defensive miscues, breakdowns in front of the net, and constant breakaways by San Jose’s forwards destroyed the defense and left Gibson left out to dry.

Anaheim’s touted defensive corps buckled in front of its goaltender.

Not having one of their best defensemen, an injured Cam Fowler, clearly hurt. However, this unit had one of the better duos in the playoffs in Hampus Lindholm and Josh Manson, and it’s still got torched to no end.
Anaheim was peppered relentlessly with odd-man rushes and constantly had issues on the breakout. The Ducks weirdly tried to flop to their backs like fish and slide through the slot to deny lanes and break up plays, but that approach wound up giving the Sharks beautiful, open chunks of ice to use instead.

The Ducks always ran out of gas when they showed comeback signs.

Anaheim periodically did good things. The Ducks had the puck on their sticks a lot, and they made a couple of strong pushes that made it look like they’d score more than four goals in four games. Gibson made enough saves at points to give them a chance after the Sharks had put consistent pressure on them. Two of the four games were decided by one goal, and either one of them could’ve turned out a different way.
But the Ducks never sustained enough to have a chance. Carlyle and his staff didn’t make whatever adjustments they had to make to level the ice. The Ducks thought they could use their signature style to break the Sharks down, but instead, they looked lost.