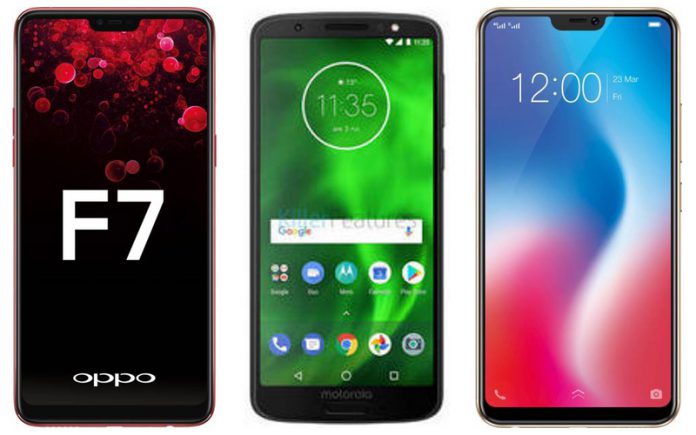 Vivo V9 vs Oppo F7 vs Moto G6 Plus: Price in India

The Vivo V9 and the Oppo F7 have a bezel-less display with a notch at the top, whereas the Moto G6 Plus might feature an 18:9 bezel-less display without a notch. The notch on display allows the Vivo V9 and the Oppo F7 to have a higher screen-to-body ratio than the Moto G6 Plus. However, the notch is for sure a concern to some people.
The Vivo V9 has a 6.3-inch IPS LCD unit, while the Oppo F7 has a 6.23-inch IPS LCD unit; both the displays have Full HD+ resolution (1920 x 2280 pixels). The Oppo F7 also has Corning Gorilla Glass protection too, which the Vivo V9 doesn’t. The Motorola Mot G6 Plus is rumoured to have a 5.93-inch IPS LCD with Full HD+ resolution and Corning Gorilla Glass protection.

Vivo has grasped the dual-camera setup trend and equipped the Vivo V9 with 16MP + 5MP dual-camera at the back. The Oppo F7 is stuck with a single 16MP primary shooter. The front-facing camera resolution of both the smartphones is almost similar, the V9 has a 24MP unit, while the F7 has a 25MP unit. The primary camera of Vivo V9 has phase-detection autofocus along with LED flash, and it can record 4K videos. The Oppo F7 also has phase-detection autofocus and LED flash in its primary camera, but it can’t record 4K videos.
The Motorola Moto G6 Plus is expected to come with 12MP + 5MP dual-camera setup. We are pretty sure that the primary camera will be equipped with phase-detection autofocus, LED flash, and 4K video recording. The front-facing camera of the Moto G6 might see a bump to 16MP from the 5MP shooter in its predecessor.

Vivo V9 vs Oppo F7 vs Moto G6 Plus: Performance

The Vivo V9 is powered by Qualcomm Snapdragon 626 SoC. The Qualcomm chipset is mated to 4GB of RAM. The Vivo V9 runs on Android 8.1 Oreo that is customised with Vivo’s FunTouch OS 4.0. Users can expect decent performance from this smartphone. We would have liked to see a better processor in the Vivo V9 as it is a mid-range device. Smartphones like Redmi Note 5 Pro and Redmi Note 5, which are less costlier, are packing a more powerful processor.
The Oppo F7 comes with MediaTek Helio P60 SoC. The device comes in two variants; one with 4GB RAM + 64GB storage, and other with 6GB RAM + 128GB storage. The Oppo F7 runs on Android 8.0 Oreo customised with ColorOS 5.0. The MediaTek P60 SoC has weak graphics performance. Hence, the Oppo F7 is not expected to perform well at heavy games.
The Motorola Moto G6 Plus is expected to feature Snapdragon 630 SoC. The device might come in 4GB and 6GB RAM variants. If the device comes with the expected SoC, the Moto G6 Plus might beat the Vivo V9 and the Oppo F7 in terms of performance, as the Snapdragon 630 is more powerful than the Snapdragon 626, and the MediaTek Helio P60.

The leaked and rumoured specifications of the Moto G6 Plus show that it has a faster processor, better camera hardware, and a more practical approach towards the bezel-less display. These three reasons are enough to beat the Vivo V9 and the Oppo F7. The lower price of the Moto G6 Plus will also play a major part in making it the best smartphone among the three.