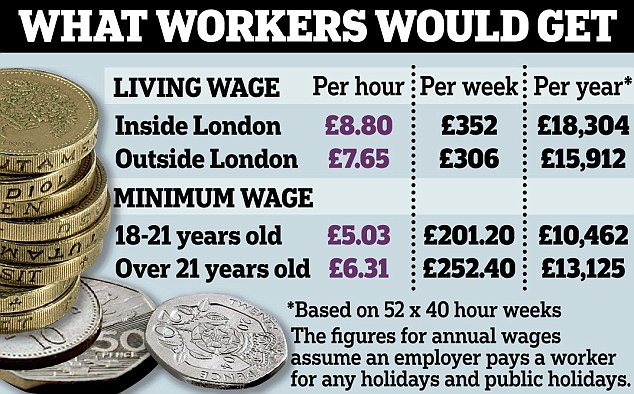 Workers on the national minimum wage would still need to work for an extra six weeks just to cover their everyday living costs, despite an inflation beating pay rise from this weekend, according to analysis.

More than 2 million workers are to receive a pay rise of at least 4.4% from Sunday, as the government’s national living wage increases to £7.83 per hour from £7.50 for over 25s.

The increase amounts to more than £600 per year for full-time workers on basic pay. But the Living Wage Foundation estimates the new government minimum would provide a worker with an annual salary worth almost £1,800 less than the real living wage, which is calculated to cover what people need to spend on basic living costs for housing, transport, childcare and food.

The foundation estimates an additional 33 working days would be required to make up the shortfall between the government minimum and its own estimate for a “real living wage” of £8.75 per hour – the equivalent of more than six weeks extra work every year.

Tess Lanning, director of the Living Wage Foundation, said about 5.5 million people earned less than the amount required to cover their regular outgoings before the government’s increase on Sunday.

She said she welcomed the increase but it did not do enough to help those on low incomes. “For these people, this is the difference between struggling to make ends meet and being able to cover the basic: from decent meals to heating bills, to the costs of a birthday cake for their children,” she said.

The shortfall in pay equates to more than six months’ food and drink bill for an average household, an average gas and electricity bill for more than a year, or almost three months’ worth of average rental payments.

The gap in London is even wider due to higher living costs, with workers in the capital thought to need an additional 84 days to earn a real living wage, which the foundation estimates would be £10.20 per hour.

Younger workers are also penalized, as the government minimum is lower for people under the age of 25. The Living Wage Foundation said those 18 and 20 would need to work an extra 135 days to receive enough pay to earn a living wage.

British workers have seen the weakest period for pay growth since the Napoleonic wars in the decade since the financial cr, according to economist, who point to sluggish average pay growth and inflation eroding any gains.

There have been some positive signs for workers in recent weeks, after the rate of inflation fell to its lowest since the autumn and wage growth began to slowly rise amid the lowest rates of unemployment since the mid-1970s.

According to the Resolution Foundation, workers on the minimum wage are on course for their pay to increase twice as quickly as average wages between 2015-20.

However, it said this was more than offset by the rollout of £14bn welfare cuts, which would have a damaging impact on low-income families,

The government’s independent economic forecaster, the Office of Budget Responsibility, has forecast average earnings after inflation will still be below their 2008 level by the middle of the next decade.

The TUC general secretary, France O’Grady, urged more companies to sign up to the living wage, which is a voluntary measure unlike the government minimum.

She said: “Millions of families are struggling to keep up with the cost of living. The real living wage would make a huge difference to Britain’s lowest paid.”