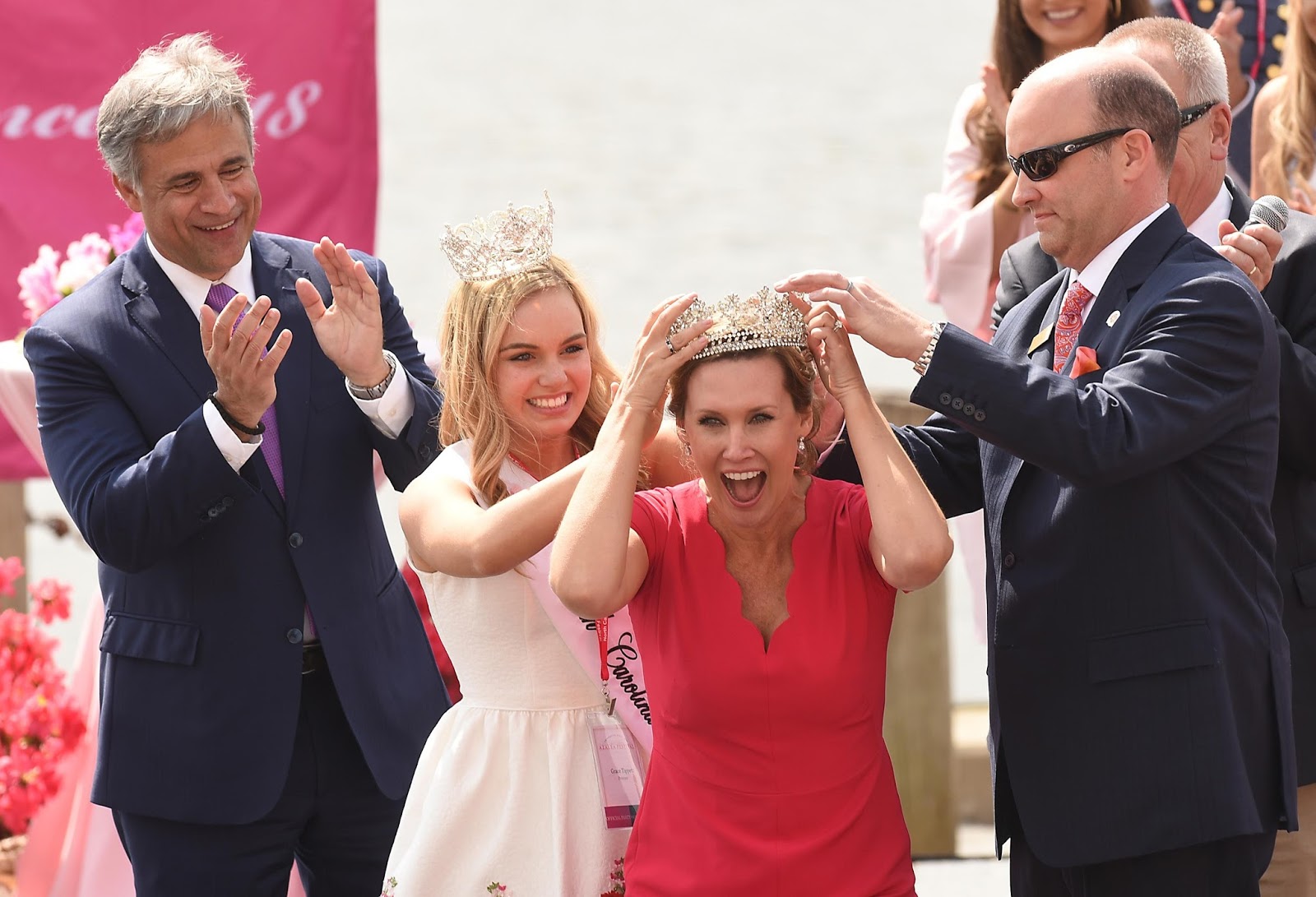 
WILMINGTON -- A single pink crystal shimmered in Queen Azalea Beth Troutman’s hand as she leaned forward across the pink-clothed table set up on the Wilmington Riverwalk Wednesday. A bright-eyed young girl stared in awe, as Troutman handed her the pink crystal and told her it would bring her good luck.
The 71st N.C. Azalea Festival began this week, and Festival President Justin Wolfe helped crown Troutman the 2018 Queen Azalea Wednesday afternoon at Riverfront Park. Before being crowned, Troutman shared a story of how, when she was a 10-year-old girl attending the N.C. Azalea Festival in 1988, the then-Queen Azalea gave her a small crystal and told her it would bring her good luck.
Troutman passed on that cherished piece of her past Wednesday afternoon, as she handed crystals to multiple young girls.
“To know what that meant to me as a 10-year-old and to know it was very important for me to hang on to … and for me to be able to hopefully be a role model to these young girls, to help them feel empowered, to help them feel like anything is possible … if there is something I can do or say that helps them feel a little more powerful, and a little more comfortable with their own voice and inside their own skin, then I’m pretty happy about that,” Troutman said.
During the coronation, Wolfe introduced the festival’s special guests, including Adrian Wood, a blogger with more than 50,000 followers, Miss North Carolina 2017 Victoria Huggins, official festival artist Virginia Wright-Frierson and chef Vivian Howard.
Wolfe then introduced Troutman, who is an Emmy Award-winning television personality as well as a motivational speaker. She also was the first woman to run for the U.S. House in North Carolina’s 8th Congressional District.
In 1997 and 1999, Troutman said she had the opportunity to serve on the Queen Azalea’s court, and to be named Queen Azalea 2018 was “humbling” and an honor.
“I will certainly say that I am following in some very big footsteps … because there have been some very remarkable, very accomplished women who have represented this community and have served as Queen Azalea,” she said. “To be considered among that list and now be a part of that sisterhood, the 10-year-old little girl who first met Queen Azalea in 1988, she is tickled azalea pink.”
Along with the coronation, Troutman attended the Queen’s Tea, an inaugural event for the festival held at the Hotel Ballast downtown prior to the coronation.
Jonathan Hedge, president-elect of the N.C. Azalea Festival, said Wednesday’s events couldn’t have gone “any better.”
“We couldn’t have asked for better weather, we couldn’t ask for better company and we certainly couldn’t ask for a better queen,” he said.
Among those waiting to see and talk to the queen following her coronation was Wilmington native Barry Harris and his wife, Melissa. While Barry Harris has attended 54 N.C. Azalea Festivals, it was the first time he was bringing his wife of two years to the event.
Barry Harris said what keeps him coming back to the festival is the camaraderie and friendship of people he knows and meets during festival activities.
As for this year’s queen, Harris said she seems “awesome.”
“I love that she’s from North Carolina,” he said.