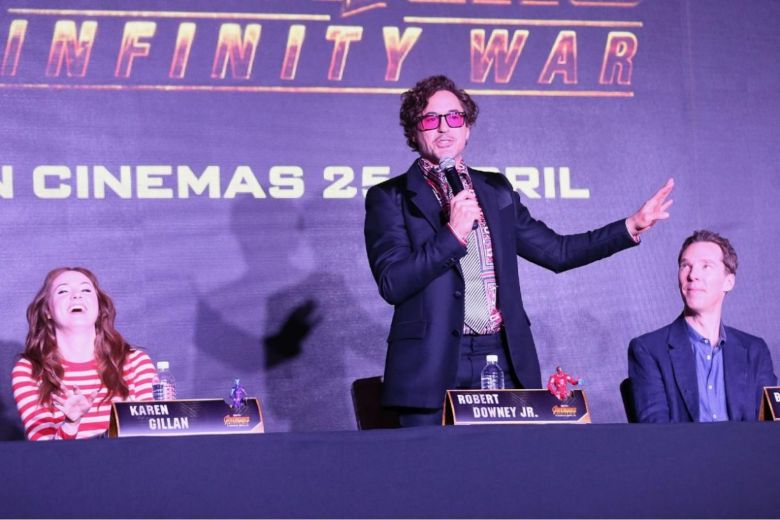 SINGAPORE - An average of one or two new Marvel Cinematic Universe films have been released each year over the last decade, and at least another 14 are in the works. So how does the franchise keep audiences interested?


The trick, says actor Robert Downey Jr., is never to repeat something, even if it has proven to be successful in the past.
The 53-year-old, who plays the hugely popular superhero Iron Man in the franchise, told regional media at a press conference at Marina Bay Sands on Sunday morning (April 15): "I read in some magazine that the No. 1 fan-voted moment was the airport fight in Captain America: Civil War (2016), because there are so many superheroes at once.
"But people don't want a repeat of what's worked well. The challenge this time was how do we expand something without repeating something that has been executed well before. It's the anti-process, if you will. Because usually, if something works, you just keep doing that."
The American actor was fielding interviews in Singapore alongside British star Benedict Cumberbatch and Scottish actress Karen Gillan - who play superhero characters Doctor Strange and Nebula respectively - to promote their highly anticipated new Marvel movie Avengers: Infinity War.
The film's director, Joe Russo, was also present - his second time promoting a film here after his last visit in 2016 with the cast of Captain America: Civil War.
Russo, 46, got the entire room of journalists cheering when he joked that he had stopped by the last time only as a favour to Chris Evans, the actor who plays Captain America.
In the films, Captain America and Iron Man are at odds with each other.
The director said: "All along, I have supported Team Iron Man, honestly. I was here (the last time) with Team Cap as a favour to Chris.
"But I absolutely love Singapore. The fans are the best in the world. We're all very happy to be here."
There is immense hype over Avengers: Infinity War as the movie gathers the most Marvel superheroes in the same project than ever before. Besides the Avengers superheroes, Guardians Of The Galaxy superheroes are also added to the mix for the first time.
As much fun as that will be for fans, putting the movie together was a massive undertaking for the director and producers.
Cumberbatch, 41, says: "The director and the producers are the ones with super powers. The line producers who worked out all of our schedules to do the film - it's all a small miracle."
Russo says: "Logistically, this was the most complicated movie to put together in history. We shut down Hollywood for a year, because we had every actor working in the business scheduled somewhere in the movie."
One superhero is, however, starkly missing from all the movie trailers as well as the character posters released so far - Hawkeye, played by Jeremy Renner.
Russo did not confirm whether he would indeed be absent in the new film, but would only say that the character is "not forgotten".
He says: "We did not forget the twice-nominated Renner - and those are Oscars nominations, by the way. We have a really interesting story cooked up for Hawkeye, so I would say, patience is a virtue. We did not forget Hawkeye."
Avengers: Infinity War opens in Singapore on April 25.