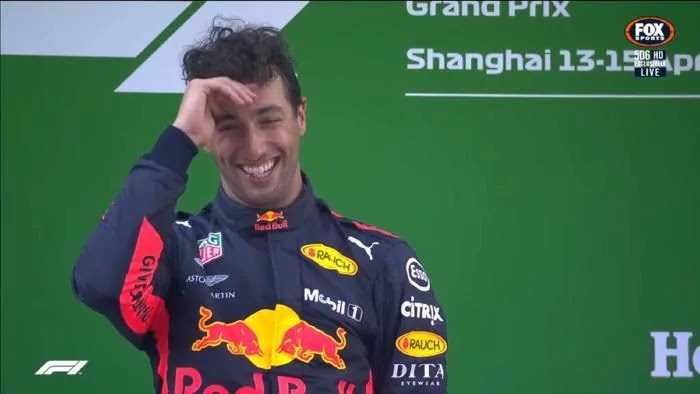 From fourth and sixth, Max Verstappen and Daniel Ricciardo were immediately on the move on the restart.


Ricciardo soon picked off Kimi Raikkonen, before nabbing Verstappen after the Dutchman ran off the track while trying to pass Hamilton.
The reigning world champion was next to fall, Ricciardo taking third away at the Turn 14 hairpin, before repeating the dose on Sebastian Vettel a couple of laps later.
“Sometimes you’ve just got to lick the stamp and send it,” Ricciardo said.
“We had the soft tyre so I knew I could at least get a little bit more out of the braking than them.
“A lot of the time you just get one chance to try so I thought I’d make the most of the opportunity.”
Vettel wasn’t in third for long; contact from Verstappen sent them both spinning at the hairpin, the Red Bull driver copping a 10 second penalty, while Vettel sank down to eighth at the chequered flag.

Verstappen hits Vettel
1:12
Ricciardo then thraded the needed as Bottas tried to close the door at the first hairpin, but it was too late: the Red Bull was through into a lead it would not lose.
The win is the sixth of Ricciardo’s career, hailing the work of his crew to change his engine to get him on track to qualifying with just 30 seconds to spare.
“Put ourselves 24 hours ago, I thought we may be starting at the back of the grid,” Ricciardo said.
“Firstly, thanks to the boys. Yesterday I thanked them after qualifying, but this is the real reward for that work. The mechanics worked their butts off.”