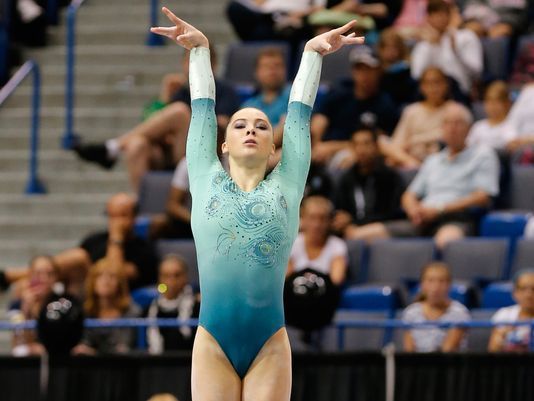 The Olympic gymnast says the abuse began the very first day she met the doctor.

Olympic gold medal gymnast McKayla Maroney says former team doctor Larry Nassar molested her on her very first visit to the famed Karolyi ranch — and then abused her hundreds of times over the next five years.

"He said that nobody would understand this and the sacrifice that it takes to get to the Olympics. So you can't tell people this," Maroney said in an exclusive interview with NBC News' Savannah Guthrie for a special investigative edition of "Dateline" airing Sunday night, 7 p.m. ET/6 p.m. CT.

"I actually was like, 'That makes sense. I don't want to tell anybody about this,'" she recalled. "I didn't believe that they would understand."
The one-hour broadcast will also include an exclusive interview with legendary gymnastics coaches Bela and Martha Karolyi, who have not spoken since the sexual abuse scandal engulfed the sport a year and a half ago.
The show also includes interviews with Olympian Aly Raisman and Gina Nichols, the mother of former world champion gymnast Maggie Nichols, and new details about an alleged cover-up attempt by USA Gymnastics and the failure of the FBI and others to stop Nassar sooner.
Speaking in detail about her ordeal for the first time since she disclosed she was a victim last year, Maroney described what happened the first day she met Nassar at the ranch, when she was just 13 years old.
He told me he was going to do a checkup on me and that was the first day I was abused," she said.
Nassar, who admitted in court that he penetrated his patients with ungloved hands under the guise of medical treatment, saw Maroney every time she was at the ranch and at competitions around the world.
She said he molested her "every time."
How many times before she finally quit competitive gymnastics? "Hundreds," Maroney said.
Earlier this week, Maroney appeared at a luncheon for a child-protection charity and blasted the institutions that failed to protect her and hundreds of other from Nassar — including USA Gymnastics, the U.S. Olympic Committee and Michigan State University, where he had a sports medicine practice.
"All they cared about is money and medals. It didn't seem they cared about anything else," she said.
In response, USA Gymnastics — which had Maroney sign a non-disclosure agreement as part of a secret settlement — issued a statement saying it admired her courage in speaking out.
"We are doing everything possible to prevent abuse, and we hope everything we do going forward makes this very clear," the organization said.
The USOC has previously apologized to Nassar's victims and called for reforms, and Michigan State University has said it's also making changes in response to criticism it ignored warnings that Nassar, now serving up to 175 years in prison, was a predator.
Questions about the institutions' role in the crisis continue to swirl, with a U.S. Senate subcommittee set to hold a hearing Wednesday afternoon on how Olympic athletes can be protected. Among those testifying is Maroney's "Fierce Five" teammate, Jordyn Wieber, another Nassar victim.