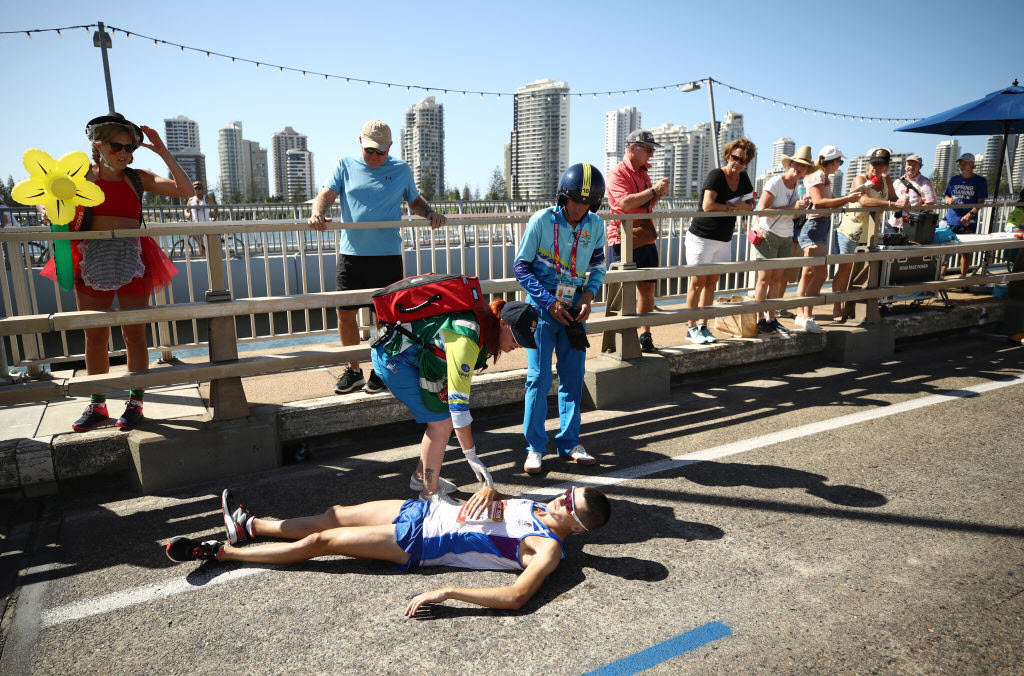 Commonwealth Games viewers and commentators were left shocked when Scotland's Callum Hawkins collapsed less than 2km short of the finish line in the men's marathon.


Hawkins was leading the competition by almost two minutes before his heartbreaking end to the event.
During the race on the Gold Coast, he looked certain to claim the gold, until he was seen struggling before collapsing.
Determined, he tried to continue the race before he collapsed again, hitting his head on a barrier.
Australia's Mike Shelley won the race but the audience was left disturbed by Hawkins' exit. Callum Hawkins of Scotland collapses as he competes in the Men's marathon on day 11 of the Gold Coast 2018 Commonwealth Games.
Getty
Many have since criticised how long it took medical staff to attend to Hawkins, who was physically in distress.
BBC's sports commentator Steve Cram said it was a "disgrace" - noting the time it took for any paramedics to attend to Hawkins.
"Where on earth is the help? You cannot just wait at the finish line. They've got radios. And finally, somebody arrives. I think it's disgraceful."
Shelley ran past Hawkins as help arrived. The Australian went on to claim victory.
Hawkins was eventually transported by ambulance and is "receiving medical treatment".

Team Scotland✔@Team_Scotland
CALLUM HAWKINS UPDATE:Callum has been taken to hospital for medical review following his collapse in the Marathon as is standard procedure. He is being supported by Team Scotland medical staff & there are no major concerns at this stage.More information to be issued in due course

Twitter Ads info and privacy
The temperature on the Gold Coast during the event was about 30 degrees Celcius.
It's believed officials informed spectators not to help Hawkins, believing medical support was on the way.
The rules of the race would have seen him disqualified if he had received assistance but help did not arrive and he was left lying on the ground for several minutes.
Channel 7 commentator and Australian athletics great Tamsyn Lewis said the rules of the sport should have been thrown out after the incident. Callum Hawkins of Scotland collapses in the Men's marathon on day 11 of the Gold Coast 2018 Commonwealth Games.
Getty
She said the spectators should have helped him.
“I think now is the time. An athlete works all their life to win gold medals. But there is one thing more important than that, his health. He should be assisted now.
Seven's Bruce McAvaney said officials should have tried to stop Hawkins from trying to run on after he collapsed the first time.
“This is distressing. Incredibly distressing. He needs some help. Somebody please come and help him.”

Iain Payten✔@iainpayten
What about the moron official who yells "get back" to the spectators trying to comfort Callum Hawkins. Deadbeat. They were the only people with him for a long time.

Ron Lewis✔@RonLewisTimes
How pathetic are the Commonwealth Games organisers? Callum Hawkins should be in an ambulance and he's lying flat on the road

Alex Spink✔@alexspinkmirror
Scotland’s Callum Hawkins collapses whilst leading marathon under a burning hot sun. No help around for him. Very worrying.

Jim Munro✔@JimMunro
What the hell is the matter with the medical officials at the #commonwealthgames?!! .... marathon leader Callum Hawkins not just in obvious distress, he’s hit his head a couple of times falling... no help in sight, just people taking pictures on their phones Callum Hawkins of Scotland is given assistance as he collapses in the Men's marathon.
Getty