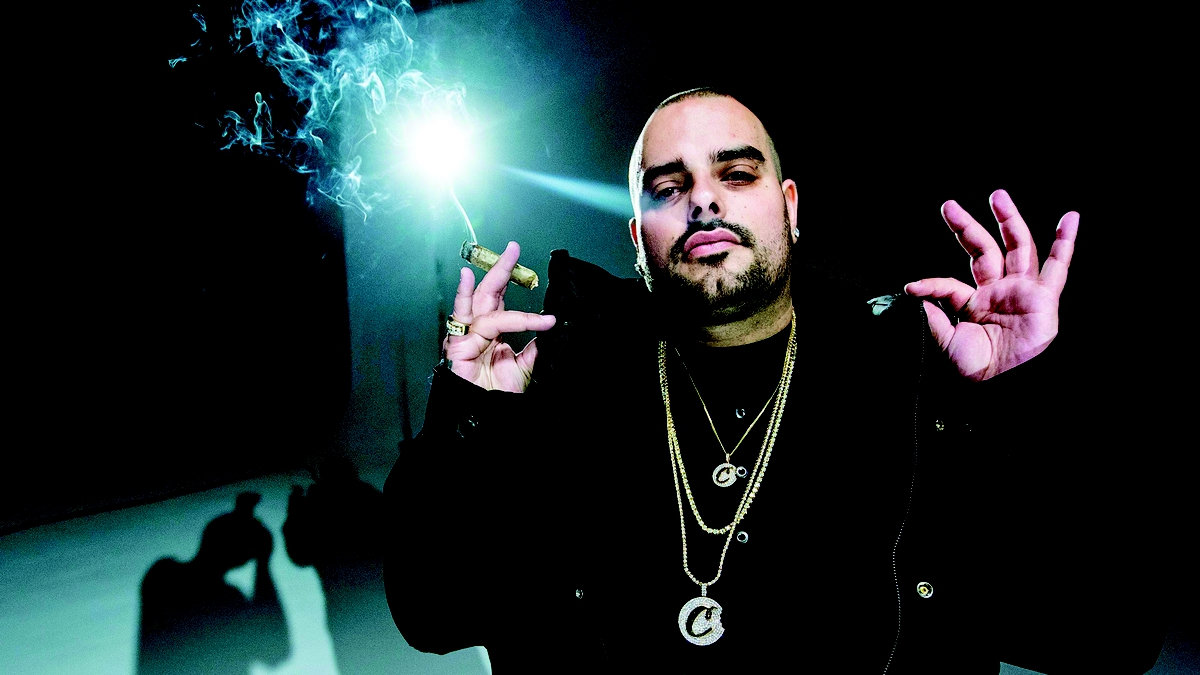 Berner made inroads with established Bay Area rappers one fistful of pot at a time.


Before the rapper and weed magnate known as Berner had dispensaries in four states, a hemp seed-infused sports drink, novelty candy that looks exactly like ready-to-smoke herb, multiple clothing companies and accessory endorsements, an ambassadorship to his own cannabis-specific social media platform and 16 full-length albums, he was just an unknown Bay Area budtender moonlighting as an MC.
He quickly learned that a little bit of Cookies—the internationally renowned cross of Durban Poison and OG Kush that he was sourcing direct from the strain's creator—goes a long way.
A decade later, the former Gilbert Milam Jr. is an unlikely crossover celebrity in the worlds of hip-hop and cannabis. In 2012, he signed with Wiz Khalifa's Taylor Gang, entwining his stardom as a Northern California weed personality with that of an artist inducted into rap's mainstream.
According to a 2016 SF Weekly profile, Berner's dual career paths as rapper and cannabis entrepreneur are two sides of the same dollar. He graduated from small-time, black-market hustler to budtender at San Francisco med-era dispensary Hemp Center, representing exclusive growers and making inroads with established Bay Area rappers one fistful of pot at a time.
A few buds in the right hands gained Berner access to Bay Area hip-hop's inner circles, which is where he met the Jacka—the first established MC to take the young weed slinger with a penchant for words under his wing and into the studio. Berner and the Jacka authored a three-album suite, Drought Season 1-3, the third of which received a formidable 7.3 on Pitchfork in the wake of Jacka's untimely death in 2015.
All the while, Berner was building a reputation as the public interface for the Cookies that offered fodder for much of his rhymes. The rapper's connection to the iconic Bay Area cultivar has had a lasting impact both on his career as an artist and as one of modern cannabis's most visible commercial figures.
Ivan, the mononymous co-owner of Los Angeles cannabis producer Jungle Boys and co-owner of cannabis-licensing firm Exotikz, says that while the rapper has been the face of Cookies for the better part of a decade, "Berner doesn't actually grow." But that hasn't stopped him from growing a constellation of businesses around the promotion, licensing and retail sale of the famed strain.
According to Ivan, Exotikz is currently negotiating a licensing deal that would bring Cookies Fam genetics to 50 dispensaries across the country.
And in terms of his continued output as a rapper, Berner is presently on tour in support of recently released The Big Pescado. It's a who's who of weed rap's most prominent figures: label boss Wiz Khalifa, of course, as well as Cypress Hill's B-Real and the one and stony Snoop Dogg, among a half-dozen others.
But the record is also a carousel of product placements—names of cannabis varietals conveniently on tap at his own pot shops (named Cookies, of course) across the country and endorsed by some of the game's most recognizable figures. In "Noid," Snoop Dogg holds down a chorus about getting paranoid from strong weed, flowers we're to assume are the work of Berner. His pot is so good, even Snoop gets too baked smoking it.
Combined with plans for expanded, nationwide retail access, The Big Pescado solidifies a legit stab at an industry takeover, oscillating between Berner as creative personality, businessman and covert advertiser.
However you want to see Berner, he said it best when he told SF Weekly, "I'm just here to make money, really."