VIVO IPL Rivalries: RCB vs DD at the Chinnaswamy 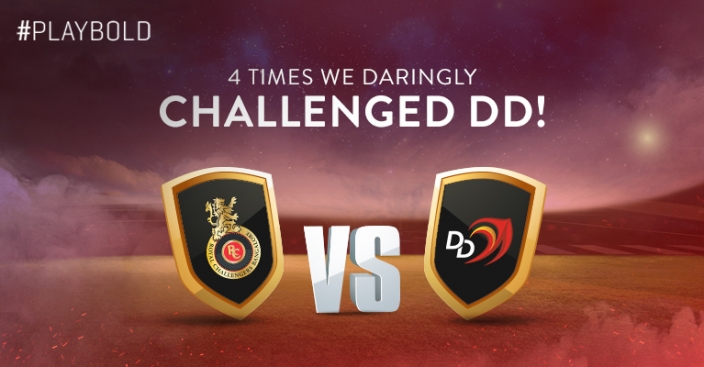 Royal Challengers Bangalore and Delhi Daredevils both are with 2 points and one win from their 4 matches. It's still early days in the tournament and both these teams will be looking to get a win under their belt this Saturday to move up in the table.


RCB has an impressive record against DD as they've won 11 out of the 19 games they've played while DD could emerge victorious on only 6 of those occasions. One of the matches was a no result due to rain and the other one ended as a tie which was ultimately won by RCB in the super over.

Here we have a look at 5 interesting encounters at the Chinnaswamy between these two teams in the past 10 seasons.

DD played their first match of the VIVO IPL 2017 against RCB and what a thrilling game it proved to be. RCB were without their two stalwarts, Virat Kohli, and AB de Villiers and Watson was leading in their absence. RCB won the toss and surprisingly chose to bat first contrary to the popular trend of chasing at the Chinnaswamy. The decision seemed to backfire as RCB were reduced to 55-3 in 9 overs with both Gayle and Watson back in the hut. But Kedar Jadhav walked in and played a superb inning of 69 (37) to resurrect RCB only to perish to a slower ball of Zaheer in the 17th over. RCB could manage only 15 runs in the last 3 overs and ended with a below-par score of 157-8 in their 20 overs.

Since 2013, A score of below 200 had never been defended at the Chinnaswamy and Daredevils seemed to be the favorites to win this game going into the chase. But it was the turn of RCB's bowlers to rise to the occasion and they made sure they did. The bowlers were very tight with the lines they bowled and gave nothing away to the batsmen while picking wickets at regular intervals. While wickets kept falling on one end, Rishabh Pant who had just suffered a huge personal loss of his father passing away was resolutely calm on the other end. He threatened to take the game away from RCB and brought DD to a situation where only 22 were required in the last 2 overs. But Watson bowled an incredible penultimate over giving away just 3 runs. With 19 required in the last over Watson handed the ball to Pawan Negi who was going to bowl his first over of the match and did a brilliant job by getting Pant on the very first delivery and with only the tailenders left it became all too easy and he ended up giving away just 3 runs in the last over and RCB won a thrilling match by 15 runs.

It was match number 11 of the VIVO IPL 2016 and Daredevils had won the toss and elected to field first. Zaheer opened the bowling and got rid of the dangerous Gayle in the very first over. But then, de Villiers walked in and we got to witness another Kohli-ABD masterclass. The duo went on to add 107 runs for the 2nd wicket and RCB looked on the course to set another target of 200+. De Villiers fell for 55 (33) but then Watson came in and scored a blazing 33 off just 19 deliveries. The DD bowlers pulled things back in the last 4 overs giving away just 27 runs and restricted RCB for 191-5 in 20 overs. Kohli top scored with a 48 ball 79.

Just like RCB, DD lost their opener Shreyas Iyer in the very first over courtesy an unbelievable partnership catch by Watson and Wiese. Samson struggled to score but Quinton de Kock was in sublime touch and was scoring boundaries at will. Samson's struggle soon came to an end as he was dismissed by Watson on 9 (14). While de Kock was scoring fluently, Karun Nair proved to be a perfect partner rotating strikes and getting the odd boundaries on the bad deliveries. De Kock went to score the first century of VIVO IPL 2016 and scored 108 off 51 balls before being dismissed. In the end, DD comfortably chased the target with 7 wickets in hand and 5 balls to spare.

This match at Bengaluru was certainly the most thrilling match that these two teams have ever been involved in together. RCB won the toss and elected to field first. RCB bowlers were once again brilliant with the bowl. The DD batsmen struggled on this pitch and no batsmen could get going. It was only Kedar Jadhav and Irfan Pathan towards the end who hit a few blows and managed to take their team to a respectable total. DD scored 30 off the last 2 overs and ended with 152-5 on the board.

RCB did not have an ideal start losing both their openers within 4 overs. It was once again Kohli and de Villiers who stitched an important 103 run partnership in 12.2 overs. Just as RCB looked set to win this game without any drama, RCB suffered a batting collapse. From 129-2, RCB were reduced to 138-7 in a span of 2.5 overs. With 11 required in the last over and only the tails left to do the task, it was anyone's game. However, Ravi Rampaul managed to hit the first ball for a six but could only score 4 runs in the last 5 balls leading to a super over.

Umesh Yadav bowled the super over from DD's side while Gayle and de Villiers opened for RCB. The first 4 balls fetched only 3 runs but de Villiers sent the last two balls over the ropes for back to back sixes. Ben Rohrer and Warner opened the innings for DD and Ravi Rampaul had 5 to defend. Rampaul picked up Warner on the first ball but Pathan walked in and scored 10 in the next 3. With 5 required off 2, Rampaul held his nerves and gave away just one run on the 5th ball and picked up Rohrer's wicket on the last ball to hand RCB 2 points.

This match was another low scoring affair by Chinnaswamy's standard. DD won the toss and elected to field first. Andrew McDonald who was sent to open the innings gave RCB a quick start by scoring 30 off 19. But after his wicket fell, other RCB batsmen failed to get going and Pujara, Virat, Tiwary, and Mayank Aggarwal fell cheaply. But our superman AB de Villiers showed a lot of character and proved why he's one of the best in the business. He remained not out on 64 (42) taking RCB to a fighting total of 157-8 in 20 overs.

Finch and Sehwag opened for Delhi and Zaheer picked up Sehwag in the very first over. Finch and Ojha then shared a partnership of 42 for the 2nd wicket but after that, there was no significant contribution from anyone else. RCB's bowlers strangled DD's batting line-up and kept picking wickets. Ultimately 157 proved to be a little too many for DD as RCB won the match by 20 runs.