Home » Celebrity and Movies » Trending » Mercury Review: An interesting attempt which appeals more to the brain than heart

Mercury Review: An interesting attempt which appeals more to the brain than heart 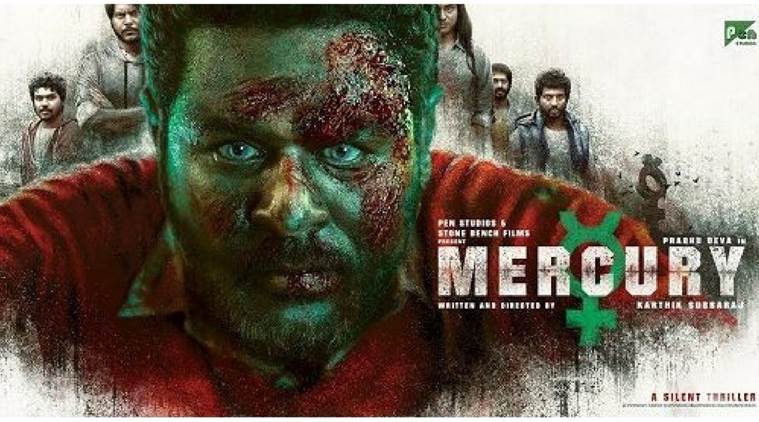 Mercury, Karthik Subbaraj's silent film, deserves applause for daring to break out of the formula horror film and attempting something new. For one, we aren't presented with a haunted bungalow which has a vengeful resident ghost. And thankfully, there's nobody walking around with anklets at midnight. But then, if you've watched Pizza, you'd know better than to expect such routine tropes in a Karthik Subbaraj thriller.


The story plays out in an abandoned factory which is linked to the lives of all the protagonists. It's a spooky hide-and-seek game where the hiders are deprived of hearing and speech while the seeker is deprived of sight. It's to the film's credit that you don't miss the dialogues at all - and there are no subtitles for the sign language spoken by the characters either.

What we watch then is akin to a mime show that goes on for nearly two hours but you don't have to work hard to follow the film or understand the emotions of its characters. Perhaps all our screenplay writers should first write a draft assuming the film is a silent one and later add lines only when absolutely necessary. Imagine how much better the average film would be minus the mandatory punch dialogues and bombastic speechifying.

Mercury builds up the creeps slowly - like the deer that watches the group, a silent eyewitness that unsettles them. Or an image of a newly hatched chick crawling on a grubby floor. The factory scenes have a noxious green tinge to them, with the camera playing its own hide-and-seek game with the corners and turns of the landscape. Till the interval block, the film has us on edge, wondering what will happen next, despite similarities to Hollywood thrillers like I Know What You Did Last Summer and Don't Breathe.

After this, however, the tension slackens in spite of the fact that it's only now that the bizarre hunt has truly started. Perhaps because we don't care about any of the characters specially. All we know about them is that they are deaf-mute. Sanath Reddy and Indhuja have a little romance brewing between them but that doesn't tell us anything about what sort of people they are. It doesn't help that all of them employ nearly the same body language - jittery, panicky, jumpy - to suggest fear, nervousness and frustration. Though Prabhudeva's blue-tinged eyes are creepy, his actions, too, are similar to the people he's hunting. The sensory disadvantage that the each of the characters have end up being their only defining characteristic.

It may work to the film's disadvantage that it has released a week after the Hollywood thriller A Quiet Place premiered in India. The comparison may seem unfair but at the end of A Quiet Place, we know so much about the characters in the film although they barely speak. None of them has a back story but they have discernible personalities - it is this that is missing in Mercury. The characters are too cardboard to really drag us into a place of terror. It doesn't matter if A dies first or B does. It is Santhosh Narayanan's background score which compensates for this somewhat.

I was also left wondering why Indhuja, the film's lone woman protagonist, (Remya Nambeesan makes a cameo) had to be stuck in the wide-eyed innocent person role. Why and how did she get into the abandoned factory? There are many more questions that come to mind as the film draws to a close - but even if we excuse the logical loopholes, the "messaging" at the end is heavy-handed and in your face. Especially when the rest of the film manages to say so much without needing to spell it out (literally at that).

Mercury is a brave attempt - it's typical of Karthik Subbaraj's brand of filmmaking. Technically sound, rich in visual cues, appealing more to the cerebrum than the heart.

Disclaimer: This review was not paid for or commissioned by anyone associated with the film. Neither TNM nor any of its reviewers have any sort of business relationship with the film's producers or any other members of its cast and crew.